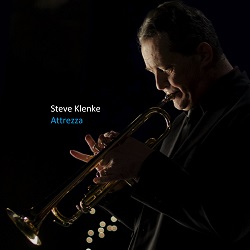 Elephonic Studios is excited to announce the release of a new Jazz EP from Albuquerque composer and trumpet-player Steve Klenke. The album was recorded at Elephonic Studios with Jesse Korman engineering. Here’s a review of the album.

Steve Klenke, a talented trumpeter and composer based in Albuquerque, New Mexico, has released a six-song EP, Attrezza. The music, which is only available digitally, features a half-dozen of his best compositions, four of which have lyrics by the late Ronald “Pete” Lumpkins.

Klenke, who earned a Bachelor of Music from Elmhurst College and attended the Berklee College of Music for two years, worked as a music educator in Chicago during 1983-2000. He played trumpet with local big bands and led his own jazz group Night Flight. Since moving to New Mexico in 2006, he has been an important part of the local music scene. In addition to working with a variety of bands, he recorded a jazz CD a few years ago, Tangerine.

Attrezza features Steve Klenke with a quintet that also includes pianist Robert Muller, guitarist Lewis Winn, bassist Jonathan McMillan, and drummer John Bartlit, with Josh Munnell taking vocals on four of the numbers. The EP begins with the title cut, a medium-tempo minor-toned instrumental with excellent chord changes, a blazing trumpet solo that ends with some impressive high notes, and spots for piano, guitar and a bass/drums tradeoff. “I Fall In Love Too Easy” introduces Josh Munnell’s warm singing on a piece that takes some unexpected turns in its melody and chord changes. The composer also contributes some nice trumpet. “My Forever Valentine” is a happy love ballad that can fill the shortage of valentine songs. The medium-tempo “Satural” gives each member of the quintet an opportunity to make a contribution. Attrezza concludes with a pair of pop-oriented songs in the Michael Franks vein that showcase Josh Munnell’s singing: “Some People” and “Haunted By Your Love.”